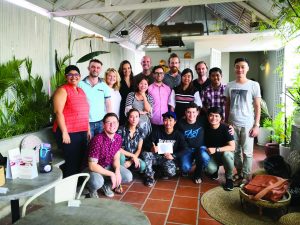 This past summer at 17 Triggers was a whirlwind of new experiences and new opportunities. In early June I arrived in Phnom Penh, Cambodia and quickly began working at 17 Triggers, an international development organization specializing in human-centered design behavior change. Since its founding 10 years ago, 17 Triggers has sought to positively impact the lives of 17 million people in the base of the pyramid (BOP) in developing countries. Through my work, I was able to assist in the project work the company does in Cambodia, Zambia, and beyond, I was able to indirectly help the lives of people at the BOP. My official title was “Junior Trigger” and I was a pilot-intern for the company, making me their first. This meant that while I was brought on board as a temporary member of a Project Pod, I also conducted some industry-specific research for the Business Development (BD) team.

Although 17 Triggers traditionally specialized at developing marketing for water, sanitation, and hygiene-sector projects (WASH), I arrived at time of redirection for the company as it began to expand into new sectors. Through my research, I was able to help introduce the company to the agriculture and digital sectors, and help catalyze ongoing projects that needed a fresh set of eyes.

In just a few weeks, I produced five research slide decks: Agriculture and Food Security in Southeast Asia; Mobile Network Operators in Agriculture, Behavior Change Games; Data; and Human-Centered Design in Digital Strategies. These decks were created as working decks for the company staff to learn about new topics and to identify cool companies in various sectors worth reaching out to about new projects.

The other half of my work allowed me to help with the production of prototypes for a number of different projects. After sharing that I build sets at Williams for the Theatre Department, the Head of Production took me under his wing and invited me to help him on a number of projects he was working on including creating prototype “baby-boxes” for a Save the Children project in Myanmar, developing budget briefs, and attending meetings with suppliers applying to host an interactive event in Zambia as part of a latrine project for Lusaka Water and Sewage Co. I was also able to play an active role in developing effective digital ad strategies on behalf of the National Social Security Foundation in Cambodia. I found all of this work to be both fascinating and incredibly rewarding.

From my first week at 17 Triggers, I was struck by how close the staff seemed to be and how they valued spending time with each other. Some of my fondest memories with the company are not work-related, but rather rock climbing, driving a motorcycle, going for runs, or spending a night on the town with different coworkers.

One of the things that surprised me about the company was that during my short stay, there was a high level of turnover. At first, I found this alarming, but I soon realized that they were side effects of larger organizational changes the company had made and that they were still transitioning. By the last few weeks of my internship, a series of amazing new hires made me feel comforted knowing that the company had settled into a new normal and this new energy will last far into the foreseeable future.

As I transition back to my life at Williams, this summer has provided some clarity and general guidance about my future. One clear discovery I made is that I really like production work. I like being the one in charge, making things happen, and having 15+ different projects going on at once. But I also like seeing the tangible results of work. This insight means that I will continue to increase my involvement in theater production as well as increase my involvement in extracurricular leadership while also pursuing courses of practice importance related to project management. Realizing I love production is slightly ironic because I started the summer thinking I would fall in love with project work and field work, but this turns out not to have been the case.

My time at 17 Triggers would not have been possible with the generous support from Mr. and Ms. Shah and this ventureship. One word that summarizes my summer experience is “all-encompassing,” and for that I am truly grateful.