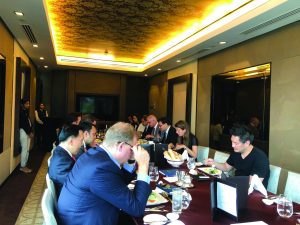 This past summer, I worked as an intern at the Milken Institute’s Asia Center (MIAC). The Milken Institute is a non-profit, non-partisan think tank aiming to catalyze practical, scalable solutions to global challenges by connecting human, financial, and educational resources to those who need them. The Asia Center conducts research and convenes events around major challenges facing Asia, including economic and population growth, geopolitics, trade, and aging.

The premier annual event of the Milken Institute is the Asia Summit, held each September in Singapore. A substantial amount of my internship was focused on preparing for the Summit. As my interest falls primarily in politics and policy, I conducted background research, wrote up panel descriptions, and invited speakers for panels on topics like U.S.-China relations, intergenerational inequality, sustainable growth, and East Asian economic policy. I also attended a number of high-level meetings and events on similar topics, including private briefings from diplomats, Singapore ministers, and executives from major corporations and wealth funds discussing global economic and political conditions. These became the basis of briefs I wrote to the team on “stakeholder perspectives,” ensuring that all the senior staff knew the viewpoints of major players in global events. In addition, I wrote a series of Op-eds with one of the senior fellows at MIAC on inter-generational inequality and environmental policy in Singapore and Southeast Asia. One is pending publication in the Nikkei Asia Review, and the other is being considered for the Straits Times (Singapore’s most widely read newspaper).

I sincerely enjoyed and appreciated the environment at MIAC. The permanent team at the office is quite small, with around 15 full-time staff, and at times the contingent of interns was nearly the same size—MIAC hires extensively during the lead-up to the Asia Summit, as it’s by far the busiest time of the year. The demographics in the office were quite remarkable; the average age in the office was about 26, and my supervisor was only 29 years old. The interns and full-timers hailed from a broad range of places, from Arizona and Australia to one intern raised Orthodox Jewish in Israel and another from a hill tribe in Vietnam (English was her fifth language!). Because of the small size and youth of the office, I was quickly able to become responsible for what seemed at first to be insanely high-level tasks (telephone meetings with Ben Bernanke, negotiating speaking fees with Kobe Bryant’s agent, and briefings with the senior U.S. house diplomatic staff, among others). I was also was able to dictate what topics I wanted to work on, settling pretty solidly into a niche of economic policy and U.S. international relations in Asia whenever possible.

The environment in the office was more corporate than I was used to, coming from a background working in politics and at NGOs, which tend to be far more informal for interns. It was certainly complete with all the ironed button-down shirts, firm handshakes and business cards that I had expected; this in itself was a learning experience. I also learned on the fly about the proper ways to network, make an impression, and carry the initial connection into something meaningful. Fortunately, MIAC was a great learning environment without too much unnecessary stress. I had the flexibility to work from home 1-2 days a week unless an important meeting was taking place. I also was encouraged to attend events and conferences in my areas of interest as long as I reported information back to the team. I would not describe the environment as “fun” or light-hearted, since the topics and players discussed were always so substantial, but with frequent full-team lunches and events I was able to make close bonds with many of my coworkers and remain in close touch with a number of them. 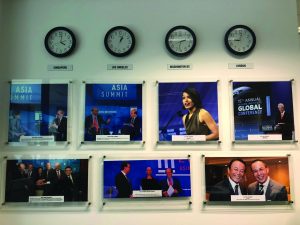 One thing that quickly became apparent during my work at MIAC was the role institutions like think tanks play in bringing people together. At times this took the form of breakthroughs in the MIAC’s Financial Innovation Labs, which bring together scientists, NGOs, and capital holders to attempt to solve issues with capital access that were overlooked by markets. For example, one lab discussed infrastructure funding in Southeast Asia, which has been distributed unequally towards massive government-funded pet projects like the India-Myanmar-Thailand Trilateral Highway—to the neglect of critically important local roads, bridges, and buses. The report from this lab provided important guidance to regulators on how to incentivize meaningful private investment, along with guidance to private investors on where their money would be best used to generate both returns and social value, beginning a process of alleviating this funding gap. Other examples could be more uncomfortable, like a Senior Regional Leaders summit that included two dozen of Asia’s most powerful CEOs, regulators, government ministers, and family principals. The topic of conversation was trade tensions in Asia, but it was clear that each of these categories of attendees had very different goals and expectations, and the conversation veered into thinly veiled advocacy for their own interests. Ostensibly shared goals (e.g., social responsibility, sustainability) seemed often more for show, and in the case of the private sector, almost always took a backseat to profits, no matter how vehement the public commitment of the company. Yet this too was a learning experience for me, providing me the chance to look behind the curtain at how major players in society act and interact outside the public eye.

Perhaps the most amazing aspect of my internship was that rather than simply sitting in and watching these public figures from afar, I got to meet and learn from many of them one-on-one. I had lengthy personal conversations about career, life, politics, and the world around us with figures including a former Australian minister for trade, the Singaporean ambassador to Hong Kong, Director of the MasterCard Center for Inclusive Growth, and more than a handful of billionaires (MIAC had a list of the “usual billionaire philanthropists” to call on as if it was an everyday thing). From them, I learned not only things I should pursue and seek in my own career, but also how the realpolitik of the wider world differs from everything I’ve been learning in the classroom and how that impacts our ability to create a positive change in the world. I will take this learning back with me in the upcoming year as I continue to study politics, policy, and economics.

Of course, I would not have been able to participate in this internship program without the generous support of the Williams alumni network and the ’68 Center for Career Exploration. Thanks to your kindness, I was able to spend the summer working in a completely new environment, honing my skills and passion for policy, and gaining a completely new perspective on how the world works. Thank you so much for your assistance—I could not have done this without you.