I was one of a group of 20 interns, but unlike most of them I was not a research assistant. Instead, I worked in the office of my supervisor Hayley Smart, assisting her and accomplishing tasks that she asked me to complete. As a result, I spent most of my time with junior employees instead of other interns. I see this as a gift, as I had the chance to hear about what work there was like. More importantly, it gave me the opportunity to learn how three people who only a few years before had been in my shoes had decided to work at MEI. Each of them had different paths, and all had many suggestions for opportunities both in DC and abroad in the Middle East. 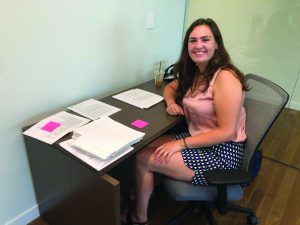 The culture at MEI was wonderful, and it provided me with a model for what I will be looking for in the future in a workplace. Both senior and junior staff were warm, friendly, and welcoming. All of the staff knew that MEI does not pay its interns, so most employees expressed gratitude on a regular basis for all of the work we put in. Hayley was especially focused on providing me with an enriching experience, which meant that I was able to sit in on a multitude of meetings ranging in size from staff meetings to event planning meetings to intimate meetings with only her, the Vice President of Development, the Senior Vice President, and the President. These meetings not only gave me insight into how organizations run, but it also meant that by the end of the summer I was the only intern the President knew by name.

My summer was made up of writing grant proposals and letters of interest to charitable foundations for grants, as well as researching potential donors, writing personnel profiles, and attending events at think tanks around the city on topics that I found interesting. As a result, my non-academic writing and research skills flourished, as did my intellectual engagement with current events in the Middle East. Grant writing varies dramatically from the style of writing that I have learned at Williams. It is made up of shorter sentences, lists, and tables instead of beautiful language and creative arguments. However, I found that my ability to shape language into persuasive arguments paid off when phrasing ideas into concepts that would appeal to the potential donor. 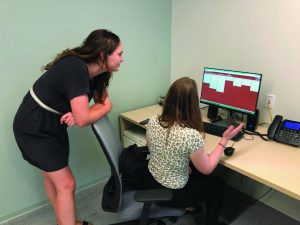 The largest project that I was involved in was writing a grant proposal to start a Cybersecurity Initiative at MEI. Through writing, researching and learning about this topic, I started to think seriously about cybersecurity for the first time. I went to a number of events in Washington focused on cybersecurity and privacy, and met a number of people who are involved in the field. I became so interested in this very important issue that is rarely discussed that I decided to create an independent study for myself this fall on cyber governance in the Middle East. This topic is at the intersection of my Arabic Studies major and my comparative politics concentration, and I’m incredibly excited to get started when I get back to school. While there are no professors at Williams who focus on this topic, I know that I will have connections at MEI from now on that will support me in this endeavor and give me literature and research suggestions in this particular field.

As an Arabic Studies and Political Science double major who will be a senior this fall, I knew that I wanted to intern at a think tank focused on the Middle East. Aside from the Department of State, think tanks are a common career path for someone in my position with my interests. My goal for the summer, therefore, was figuring out whether the think tank world was the world that I wanted to work in after I graduate. I had an amazing summer. I learned something new and I looked forward to going to work every single day. However, after witnessing the impact—or lack thereof—of employees of a think tank, I have realized that at least in the short-term future I would like to explore other career paths. Think tanks produce so much knowledge and research that is invaluable to the world, but I discovered this summer that it is rare that this knowledge ever impacts the world in meaningful ways. The think tank world is trying to grapple with this problem right now, and perhaps in the future think tanks will find a better way to share their findings with policy-makers and the general public, but for right now I hope to find a job in which I feel that my work makes a difference in the world.

Of course, I could not have participated in this internship without the generous support of the Estate of George Mead and the ’68 Center for Career Exploration. Thanks to your generosity I was able to explore a potential professional future for myself. Without this opportunity, I would never have found the professional and personal connections that I made this summer nor my newfound interest in cybersecurity. For this I am incredibly grateful.

Select Williams facilities and events are open to the public. Admission tours are available and guests are welcome at the Williams College Museum of Art, Sawyer and Schow Libraries and outdoor athletic events. Visitors are also welcome at indoor competitions and some performances and events. Proof of vaccination and masking are required for entry. See the Visiting Campus page for details.